FloatHub devices have always been able to act as a NMEA server. That is, an app or navigation software on a computer can connect (as a client) to a FloatHub device (acting as server) to receive a stream of NMEA data over WiFi. By default, this service is available on port 2319 via both the “Private WiFi” and “Public WiFi” addresses of your FloatHub device.

Without going into too much technical detail, this client-server network connection uses a very common networking protocol called TCP. There is another widely used networking protocol called UDP which is a little less strict about setting up connections, guaranteeing that messages are received and so on. In a TCP context, if either side breaks the connection (e.g. you reboot your FloatHub device or close and reopen your laptop), the connection must be formally reestablished before new data can be exchanged. In a typical UDP setup, packets are simply broadcast out to all devices on the network. If something is there to receive it, it can do so, otherwise it is just dropped. There is no need to formally set up or tear down an established link as there is with TCP.

Several navigation applications will pick up UDP NMEA transmissions if they are being broadcast on the local network. With extremely helpful input from some of our users, we have tested and are now rolling out UDP broadcast support for FloatHub. The only visible change is an additional port setting for a UDP port number (default 2000). This can be set to 0 if you’d prefer to disable UDP NMEA broadcasting altogether. 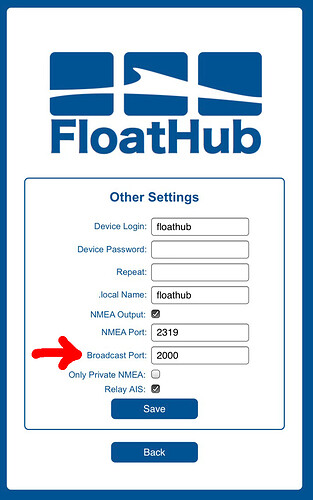 This functionality is available now and is shipping on all current orders. If you have an older device and this functionality would be of use to you, please contact us about a device exchange or we can provide support for end user firmware flashing (if you’re feeling technically adventurous).